Your favorite logic circuit simulator is now available for download. This release marks a big milestone. Until today, Logicly has simply been a fun little simulator that runs in your browser. Finally, you can buy Logicly and get the ability to save your designs and work offline. Logicly is supported on Windows and Mac. Download the free 30-day trial, or try out the Logicly online demo without downloading anything. When you’re ready, buy Logicly to receive a product key by email to unlock the trial.

Thank you all for your patience while I put the finishing touches on Logicly. I’ve been working hard over the last five months to be sure everything is working solidly. If it weren’t for so many wonderful users like you folks, I would never have made Logicly more than the subject of a quick blog post two years ago. Ready to take your Logicly creations to the next level? Go buy Logicly right now!

As always, if you make something cool with Logicly, please post pictures on Facebook for everyone to see! 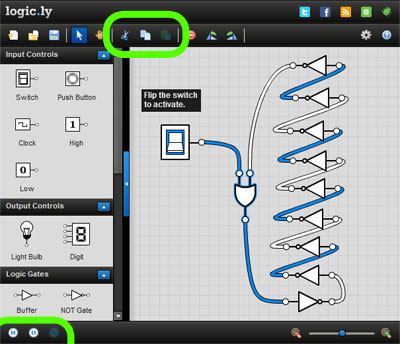 Today’s update to Logicly includes the most-requested feature of all time! Seriously, I’ve been getting it ever since I first put the prototype of Logicly on my personal blog two years ago. We now have flip-flops! With this little addition, it becomes a lot easier to build more complex circuits (though I’ve seen a couple screenshots from folks who built multiple flip-flops by hand… you’re all crazy!) 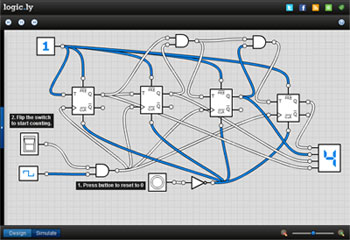 Here’s a full list of what’s new in this Logicly update:

A variety of small bug fixes got in there too. This is a very solid release with more stability and a ton of new features that I know you all will love. We’re getting closer and closer to the release of the desktop app, and I’m pretty excited.

With that in mind, what else would you like to see Logicly do? We’ve got flip-flops now, but I know everyone has more cool stuff that they’d like to see. I put up a new form for requesting features or filing bugs, and I hope you won’t hesitate to use it:

That goes straight to my inbox, and I take all feedback very seriously. Please share your most-desired features. You can also leave a comment here on the blog too, or post something on the Logicly Facebook page (don’t forget to Like it). You can even send a tweet to @logicly. Keep the great ideas coming!

Today, I’m proud to announce that I’ve uploaded the first preview build of Logicly, my digital logic simulator. I originally posted what I now call “the prototype” on my blog in late 2008. At the time, it was just a fun little experiment that I put together as a bit of nostalgia. One of my professors in college used a very simple Java applet to demonstrate logic gates in his computer architecture class, but he wanted something better. At the time, the project seemed daunting. However, with several years of real-world experience under my belt, it had become a fun weekend project.

Over the last couple of years, Logicly has received much interest from computer enthusiasts, students, and educators. Both Reddit and Hacker News linked to it and provided excellent feedback. Even now, my blog’s traffic and top search terms are still dominated by people looking for Logicly. I get a few emails every month with praise, feature requests, and even stories about how a some students are using Logicly with their thesis work.

Thanks to all this continued interest in Logicly, I feel that it’s time to add it bit more polish and release a desktop app that includes all the features that people consistently ask me to add. I have a bit more work ahead of me, but what’s there now already surpasses the prototype in a few areas. Things like multiple selection, a pan tool, and a couple new controls (a 4-bit digit, for instance) are the most obvious. I also spent a lot of time improving the simulation code, which leads to more consistency in propagation and timing.

There’s a lot more planned too.