A buffer has only a single input and a single output with behavior that is the opposite of an NOT gate. It simply passes its input, unchanged, to its output. In a boolean logic simulator, a buffer is mainly used to increase propagation delay. In a real-world circuit, a buffer can be used to amplify a signal if its current is too weak.

The truth table for a buffer appears to the right.

Each of the symbols below can be used to represent a buffer. There are multiple international standards defined, and one may preferred over the other in your region of the world.

Try the following interactive example to see for yourself how a buffer behaves.

To learn more, check out the following external resources: 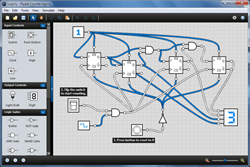 I just wanted to thank you for creating the Logicly gate simulation. I am an IT teacher using it with my sixth grade students. It is an incredible resource.

I'd just like to thank you for making Logicly. I found it very useful when I was trying to design circuits for my engineering course at University.